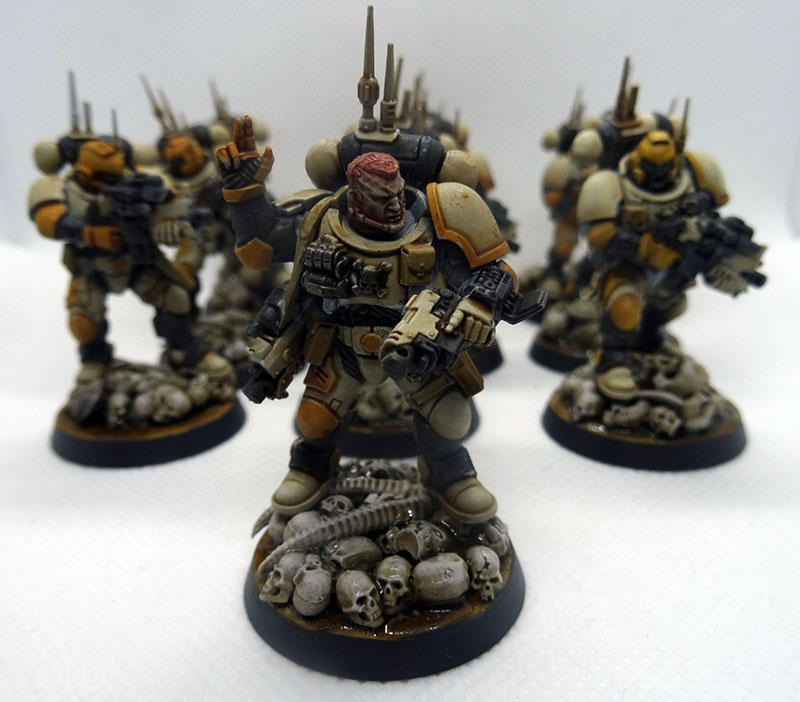 Sadly, my lightbox is too small to photograph all the models in the army together properly – I’ll have to see if I can get a nice day for them to go outside and be photographed in natural light; I should do that when I take them beyond the ‘tabletop standard’ here – that’s enough of the excuses, on with the showcase!

These models are the ones that I started out with, seeing as they’re the most standard models in the set and I could get away with one or two of them looking ‘off’ while I worked out the ins and outs of the Mortifactors paint scheme and how I could get it to translate to the Shadowspear Phobos armour marines.

No army is complete without a Captain to lead them and this is the Boss himself; he’s a very detailed model and I was somewhat concerned about painting him, but the good thing about getting models to this standard is that you don’t get to lost or concerned about the details. They’ll be worked on a bit more later when I pick up the more interesting and appealing models and take them beyond this standard.

The Librarian brings a wonderful patch of colour to the Army and he is most certainly going to be the model I pick up first to add a bit of layering and highlighting too. I was initially very worried about painting this model as I really like it and I’ve never painted camouflage before. That and because the paint scheme isn’t 100% canon Mortifactor I wasn’t sure how well he’d hold up compared to the rest of the army. I am so pleased with how he turned out and can’t wait to work on him!

These guys were a lot of fun to do, especially after my concerns about the camouflage had been overcome in previous models. I especially like the gentleman at the front who doesn’t think the goggles on his head are good enough, so has to use his second set!

I had concerns about these models too, mostly because I really didn’t like the way they looked on their flying bases/sticks. But, with some craft basing there was very little conversion work involved (Read as none) but at this point I admit, I was feeling a little burnt out with the Army and was pleased that they went together well and didn’t give me any grief.

No Primaris army is complete without a Lieutenant! This is another model I am looking forward to bringing up to a higher standard as I really like the sculpt. Maybe that’s because he is the only model in the army (Other than the awesome Librarian sword) that is holding a close combat weapon! It’s nice to have finished an army – I say that as they all have paint on them and look a lot better than grey plastic – which looks decent on finished bases.

The bases weren’t as traumatic as might be believed and only took a couple of nights to do. A pack of Games Workshop Skulls and some of Lord Commander Eloths left-over Tomb Kings skulls were enough to do the entire army and give me a few left in case I get a couple of reinforcements! These were stuck onto the base with PVA glue, spray coatedm based, washed and dry brushed. I then used some AK puddle water effect blobbed on to finish. I am particularly pleased with the bases as I feel a good base really makes an army come together. They were fun too and helped me feel a bit more accomplished as I feel like my bases have been a weak point in modelling before now.