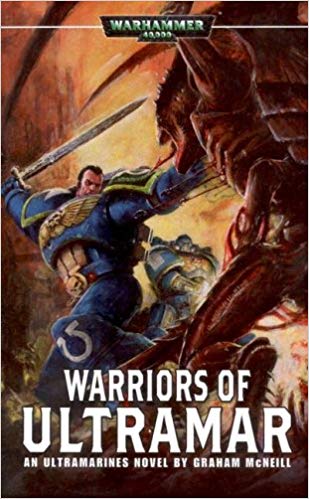 This book was recommended to me by Battle Dave on Twitter due to my interest in the Mortifactors successor chapter, but no review of anything is completely unbiased, so I’ll write my thoughts regardless.

Warriors of Ultramar depicts a full-scale invasion of Tyranid forces against the Tarsis system. Graphically showing how entire planets fail to protect themselves against such an terrifyingly, overwhelming force. The crux of the story happens on Tarsis Ultra, where the Ultramarines join forces with their successor-chapter; the utterly creepy Mortifactors along with Planetary Defences, the Death Corps of Krieg and regiments from the Imperial Guard.

I can hands-down say that this is a great read, normally I really struggle with Science-Fiction books as I find that they can be over-bloated with technical details that go right over my head. I’ve already admitted that I was invested in the story due to the Mortifactors, but I enjoyed the book beyond that fact. It was a fast-paced, graphically detailed (gory) page-turner or a story. It has a vast array of war-fare within it’s pages ranging from Space-Naval combat to futile defenses (and everything in between)

It’s an easy romp through the 40k universe and reading about Tyranids was especially interesting to me as I’d not read anything with them in before; they are the ultimate enemy. No feelings, just the need to consume and survive; so it’s pretty easy to side with the Ultramarines and their human companions in this book and it helps to hold up characters that would otherwise be much weaker should their setting be different – I’d like to test this theory by reading some of the other Uriel Ventris novels.

Also, part way through reading I came upon the realization that this was the second novel in the Uriel Ventris Chronicles; but seeing as I realized so late on in the game, it clearly wasn’t that much of an issue. Anything plot defining that happened in the first book was explained through within the pages of this book without having the pacing of this story thrown off.

The drama between the Ultramarines and the Mortifactors helps add another dimension to the novel and seeing how radically different the Mortifactors are and how they’ve deviated from the Codex Astartes (Space Marine bible) is novel and well handled! For me, these elements were real high-lights of the book and because if that I would liked to have more interactions between the Ultramarines and their successors as these seemed to trail off slightly mid-way to the point I was left thinking ‘And what are the Mortifactors doing during all this warring?’ But, I think this is where the biased reviewer is coming out as it was for the Mortifactors that I was initially reading the book.

The feeling of futility and hope within the book are perfectly balanced; the preparations for war and the human characters rapidly different personalities show wonderfully and their interactions and choices carry the book through the more difficult stages – drudging through some of the more drawn-out Naval battles.

Overall, it’s a really easy and enjoyable read, nothing ground breaking in plot, but it does have some very memorable ‘Fuck yeah‘ moments in it; which are what stories are all about (for me) if a little predictable in the outcome.