I want to talk to you about Roleplay.

Roleplaying is something that I have done for over half of my life. Once upon a time it actually meant more to me than my real life did. It was the wonderfully, perfect escape that I needed at that point in my life. I could be the most handsome man ever and be the best prince that I could ever be for my wonderful princess! 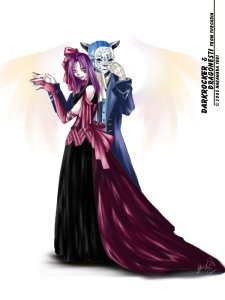 It was wonderful. More importantly, it was good fun. It helped me to feel connected to people that I cared deeply for that I could never be with. Mostly, it was just that escape that I needed. It got me away from a boring day job, out of a relationship that I had no real passion for and away from the dull monotony of everyday. I needed it then.

I don’t need it now.

Now, try as I might I just can’t seem to find my spark for it anymore.

I’ve tried several times to rekindle my passion for writing with other people and sharing storylines, but it’s just not happening. It’s not even the fact that I get so bored with it after just a few sessions. Now, I can’t even be arsed to do those few sessions because I know that the fire isn’t inside me anymore.

I would rather attempt to spend my time rekindling other passions – getting back into my personal writing or drawing or even 3D rendering.
But there is more to it than just my lack of passion. I don’t need it anymore. I don’t need to escape from a job I dislike, because I am working on my own business now and I really enjoy it. My life doesn’t suck so bad that I need a departure from it into somewhere else; anytime I need to escape I would rather read a book. I’m not in a relationship that I feel trapped in. Everyday I do something for myself in other ways, be it drawing something, playing a game (Or more recently walking the dog and playing with him)

I guess this is a journal to say that really, I am and have moved on from the pretending to be someone else.
It’s time to be myself for once.
Do things for myself.

Because, mostly the people that want RP, are selfish.
The other day, I was RPing on Frey. I stated that I had to head off for a while because my new puppy needed some attention. So the person I was RPing just emoted to me “:crates puppy.”
Wait?
You expect me to put my puppy in a cage for longer than he deserves just so I can carry on writing some stupid shit over the internet with you?
Bah. No thanks. I’d prefer to play with my puppy!!

Maybe I’ve been on the internet for too long and am cynical?

But I’ve also noticed that a lot of people who roleplay have problems. Either health or mental problems. I’m not saying each and every one of these people is lying, but not everyone I talk to has problems surely!? Apparently, they do! Some sort of issue or another. Things that just seem as an excuse for all their lives problems or why they can’t do things.
“I lost my passwords, I can’t spell, I failed school,” etc
I just get fed up of hearing other peoples crappy. bullshit excuses.

So, yeah.
I don’t think I will be attempting the whole Online Roleplaying thing for a while. For many reasons.
I’ll stick to my Tuesday night tabletop stuff thanks.
It’s more interesting and I don’t hear bollocks excuses all night.

2 Replies to “I want to talk to you about Roleplay.”