I came across something on Tumblr earlier today, it was a little comic strip about Star Wars: The Old Republic about how all Zabraki players choose to look like Darth Maul. It was a critique about how unoriginal players of games can be.
Let me see if I can find it for you…

(Credit for the comic goes to Zombie Roomie)

I’ve recently been back playing Star Wars: The Old Republic, and I confess, I do have a red and black Zabrak character; an Agent. I have mentioned him in blog posts of yonder times.

It got me thinking, why did I make such a character and what is his story and the likes.
Well, before my agent came a character named Khasul. 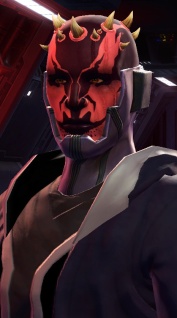 (The king of the Khasul)
Khasul came into being because my partner and I wanted to make a bit of an evil sith-lord character. Although the more I think on it, it would be rather humorous to create a really sice with-lord, just because.
And I can honestly hold my hands up and absolutely without a shadow of a doubt say that Khasul came into being because of Darth Maul! If there is anything in the films that is really worth going to town on the fangirling over, it is Maul. The man has less lines in the film than I have fingers, but he is still awesome. I mean, just watch the scene where he, Qui-Gon and Obi-Wan fight again and try to tell me how that isn’t a thing of beauty.
So, with the whole Legacy aspect to Star Wars: The Old Republic and having all our characters connected. It was only natural that Khasul have a sibling. 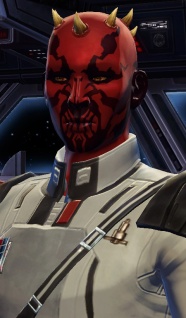 (And you’re the dirty rascal)
I’ve shared pictures of Thaeli before and probably said similar things about him and his connections before – so it’s not worth repeating myself. He is a great character to play as and the storyline of the Imperial Agent thus far has been very entertaining.
Does it still make a player unoriginal if they’re inspired by a starting point and extend a character beyond it? Yes, it is in part that Thaeli exists because of Darth Maul, is that such a negative thing? I agree completely that Khasul is little more than a Maul clone, but is that the case for all red and black Zabraki players? No at all; not all red and black things originated from Darth Maul! It’s just a case of being prepared for that comparison when speaking with others.
I believe I have spoken before on inspiration and it’s strange weaving ways of working – I’ve stated that I believe it is fine to be inspired by other, pre-existing things as long as we’re able to hold our hands up and admit to it. Especially if it runs deep in our creativity. The more that we try to hide these things, the more irksome they become – do not hide your inspirations, acknowledge them or they’ll only end up biting you on the ass later. Claiming originality when it is not there… just irritates others.